“You will just have to stay indoors this morning and keep yourselves amused,” I told my eight hens, “even if it means you can’t go out at all today. There is a storm out there and the wind is much too strong, it will blow you away.” I shut their door and battled back across the lawn.

There was a gale blowing. A hurricane. One would not have been surprised to see Dorothy flying past, from the Wizard of Oz. It was truly horrible and my muscles and nerves were on stand-by for flight or fight. More likely just flight.

An eighteen year old Essenhout tree, grown large from its gluttony of drinking water given to our vegetable garden, could not stand the wind pushing its heavy canopy northwards and went over, its meagre root ball (why would the roots need to spread far: water was on tap!) popping out of the ground like a dislocated hip joint. That was a very sorry sight. Where I sat at the kitchen table, my view was always of generous greenery framed by the kitchen window. Now the sky where the tree used to be was looking back at me with blue, forlorn emptiness.

At noon the wind died down and all became quiet. At last I could go outside and assess the damage. Pots that had blown over or down from walls were hoisted back up, plants and earth put back in place. Things that had been flung far away were fetched back. Branches strewn about, cleared up. I opened the hatch of the hen house and out ran my girls, like school children at break. I could breathe and my hens could roam.

I’d caught eating my Verbena in the courtyard. She came as fast as she could which wasn’t top speed because of her limp. I didn’t take note of where the other hens were — she was clearly on her own. Her sore foot kept her from keeping up with them when they went foraging, so it was not unusual for her to be scratching by herself.

Then, at 3.15 pm, the wind was back with all its might. I realised that the quiet we had been enjoying was nothing more than the eye of the storm. The lull was over. The southeaster screamed violently all afternoon and I stayed in my attic studio, the floor moving up and down like a trapeze. Only by millimetres, perhaps, but moving. It was an intriguing sensation. It also rained.

At 5.30 I decided my girls would want an early night on account of the weather and took them their supper. When I opened the door, the house was empty. Except for one hen (the one with the limp) sitting on a perch looking at me in surprise, it was ominously silent. The other seven were gone. I would wait until nightfall before shutting up the hen house, in case the missing ladies found their way home. Hens can’t see in the dark, so when the sun begins to go down, they start looking for somewhere to roost for the night. Which is why, if they have free access to their house, you will always find them on their perches by twilight.

My girls did not come and with a heavy heart I had to shut their house. I found it difficult to walk to my back door against the howling wind. With my weight I’m not likely to be airlifted, but imagine if you weighed less than 2kgs. You would be joining Dorothy. Which it seems is what they did. They never ever came back.

Now my one and only little hen has been bravely keeping herself company for ten days, laying me an egg each day. With the cricket plague we recently had, she has been spoiled with treats. The crickets have a peculiar habit of jumping into the pets’ bucket of drinking water and then not finding their way out again.

Every morning Kitzwallace (My cat cannot make coffee) has been seen sitting by the little bucket, gazing down at the spectacle of crickets swimming about. At first I thought she was admiring her own reflection, like a princess, until I realised it’s the crickets that are keeping her entertained. So I would take the bucket to the back step and call, “Kiep Kiep Kiep” and the brown hen would hurry over as though she’d heard the ice cream cart’s bell. And then it would be,“oh-oh… which one shall I CHOOSE?!” as if there were Pistachio, or Vanilla & Almond, or Chocolate & Hazelnut crickets. I didn’t mind her dithering to choose. I must have a small mind, for the simple event of watching her select her crickets, one by one, amused me.

But after ten days “Kiepie-Liepie” could not stand being alone any longer and decided to do something about it. A light bulb exploded in her small head and a voice told her she should grow her own companions. Yes, that’s what she would do, she thought: she would sit in the nest and after 21 days, she would have a whole bunch of friends! For the first time in her life, the brown hen went broody. A broody hen sits and sulks in her nest and will not let anyone or anything near. She will puff up and look like a turkey and make very threatening sounds if you go and say hello. “Oh come off it, Kiepie-Liepie!” I said. “There are no eggs in your nest, your nest is empty.” Broody hens don’t lay eggs.

After a couple of days of this, we decided it was enough Empty Nest stuff. For me as well as for the brown hen. On Monday my mister visited a farmyard near Wellington and bought five hens. Such beauties, too. Three of them are Potchefstroom Koekoeks and two appear to be Rhode Island Reds, although we can’t be 100% sure because the owner is in hospital and his son who took care of the sale knows a lot more about dumbbells than about hens.

We put them in the hen house here at home and there they will stay until they learn their address off by heart and also remember the precise location of their dinner. They are rather wild, you see. It would have been quite delightful if I could have provided you with footage of Mr dashing about, catching the hens in their yard. Sorry to disappoint – I was not there to see either! 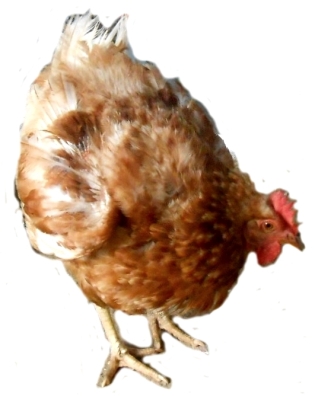 nd four days after that we’ll throw open the doors and offer them Freedom of the Farm. Since the brown hen has opted to spend her days in a nesting box, she is shut in the house too. And what does she say about her new companions? As far as I can translate, on the occasions when she has climbed out of her nest to strut about like a puffed up turkey, she has disdainfully glanced at them where they nervously are huddled and said something like, “No-no-no! NO Talking in the Corridors! No-no-no!” Oh dear. She is bossy. Not quite the person I would want to make friends with. But there you are, friendships cannot be forced.

And all going well, after about eight days we should have all six hens roaming and scratching about the place as though they have been here forever.

And all safely on their perches by twilight.

And, maybe, instead of those empty nests, six new eggs….?

5 thoughts on “Symptoms of an empty nest”